Looking for a way to spend a quite five minutes? If you mean really quiet and incredibly stealthy, then head into Stealth Master , the silent but deadly mobile game that celebrates all things sneaky, sly, underhand and devious.

Prove your ninja credentials by infiltrating buildings, sliding through the shadows, and taking out bad guys at close quarters, doing your job from a distance with a sniper rifle, or pulling off incredible daredevil heists without being seen in this fun action game that boasts loads of cool mechanics, scores of your favorite characters, and a deadly sense of humor.

DID YOU HEAR SOMETHING?

One last job – take contracts to eliminate gangsters, executives and other ne’er-do-wells in increasingly difficult ninja assassination missions that require skill, speed, and loads of stealth to reach and take out the boss.

Tons of guns – try out a whole host of weapons, from the traditional cold steel of the kunai and katana to every type of gun imaginable, including high-powered sniper rifles. Find your favorite biçim of lethal force and hone your particular skill or choose the right tool for each job and become a true weapons master.

Adapt to your environment – whether it’s dodging flashlights and lasers, using hidden passages, shooting up explosives to take out multiple enemies, or pretending to be a pot plant, Stealth Master offers dozens of different ways to use the surroundings to your advantage with ingenious game mechanisms that put variation and excitement in every level.

Steal the unstealable – once you’ve mastered assassination, try your hand at the ultimate stealth task of hi-tech robbery. Now you won’t have to attack anyone, just stay in the shadows, slip past the guards and sophisticated security equipment, and grab the juicy loot without anyone seeing you. New robbery missions offer a combination of traditional stealth moves and a variety of fun brainteasers.

Train your sights on the target, plan your strategy, keep your head down, and make sure you’ve got an escape route.

An incredible cast – complete missions and earn cash to unlock dozens of cool, pop culture-inspired characters that you can level up and train to be the ultimate assassins. Choose between action stars, superheroes, supervillains and a super-sneaky imposter to find your favorite ninja.

Now with a load of new features, new game modes, new missions, new weapons, and a new character, Stealth Master is even more fun and exciting than before. Looking for action of the stealthy, surreptitious kind?

Got what it takes to be a true master ninja assassin? Download the game now and get stealthing. 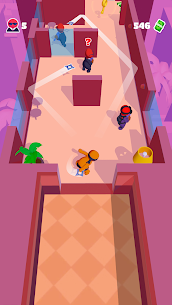 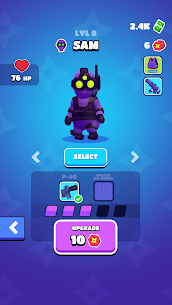 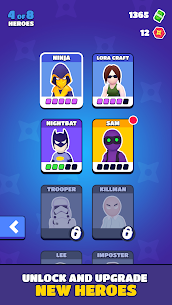